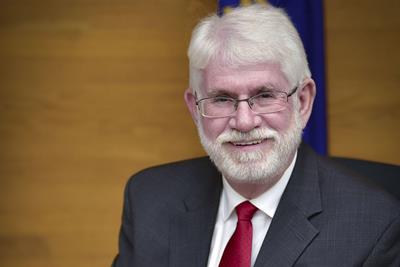 A press release from the office of Salem Mayor Chuck Bennett:

Salem, Ore. – After nearly six years serving as Mayor, and before that, nine as City Councilor, Mayor Chuck Bennett is resigning his seat effective November 2, 2022.

“I’ve had a great 15 years in office, but my priority now is to enjoy more time with my family,” said the Mayor. “We’ve accomplished an amazing amount of work during my tenure, including passing the Bond measure for the new Police Station, as well as the Bond Measure for Library improvements; dedicating the Peter Courtney Minto Island and Pedestrian Bridge; building the new Gerry Frank | Salem Rotary Amphitheater; making incredible strides toward housing our homeless; and, creating a vibrant downtown that includes housing, restaurants, and retail.”

A passionate community volunteer, Mayor Bennett has served on numerous committees for the past 30 years, including the city Budget Committee, Library Advisory Board, Planning Commission, Cultural and Tourism Promotion Advisory Board, as well as on task forces addressing issues such as revenue, homelessness, traffic congestion, and water quality and quantity. He currently serves on the advisory board for the Career and Technical Education Center for the Salem-Keizer School District. In addition, he has also served on the board of Pentacle Theatre and on the board of the Oregon Council for the Humanities.

Beginning his career more than 50 years ago as a newspaper reporter, Mayor Bennett is a former member of the Oregon House of Representatives. He retired in 2018 as Director of Government Relations for the Confederation of Oregon School Administrators