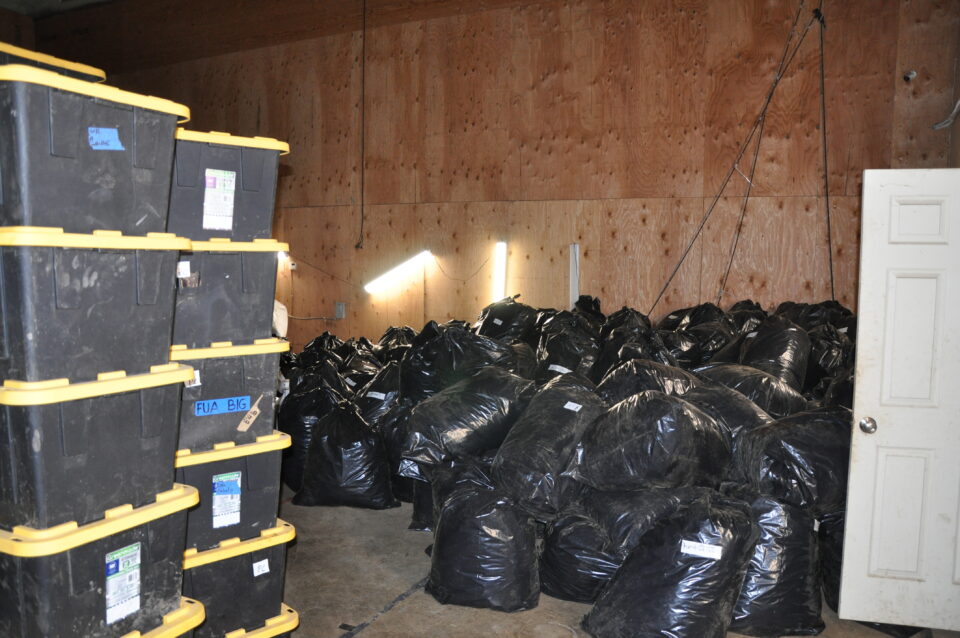 On October 18, 2022, the Yamhill County Sheriff’s Office served a search warrant at a rural property in the 14000 block of NE Stone Road in rural Newberg, OR.  Investigators found the entire property had been converted to facilitate the growth, storage, processing, and packaging of marijuana to be shipped or transported out of the area.  Investigators recovered documents and evidence suggesting this extremely large-scale organized drug trafficking organization was routinely traveling out of state, engaging in the unlawful export of marijuana from Oregon.

The warrant yielded approximately 76,930 pounds of processed marijuana.  There are currently no licenses or permits for the address or any individuals at the address, for growing or processing marijuana issued by any of the regulatory agencies in Oregon.  Investigators also recovered two AR-15 style rifles, a Kel-Tec shotgun, and multiple handguns, as well as approximately $80,000 in cash.  There were receipts recovered at the property showing multiple large dollar amount wire transfers going from Oregon to the state of Michoacan, MX.  The property essentially was set up as a receiving and processing facility, as the amount of marijuana on the property far exceeded what could be produced on the property.  Vehicles and trailers on the property yielded evidence that marijuana has been brought to the Stone Road property for further processing and packaging for shipment and sale. The street retail value of the marijuana in Oregon would be approximately $76,500,000, and on the east coast such as in New York, the street retail value would be approximately $269,000,000.

Five (5) adult males were arrested on the property, and all were lodged in the Yamhill County Jail. The individuals are identified as:

All five (5) subjects were charged with Unlawful Manufacture of a Marijuana Item, and Unlawful Possession of Marijuana.  Due to the size of the operation, the time involved in completing the search and seizure of all evidence, and the fact weapons were seized on the property, detectives requested a Judge’s Override to the Senate Bill 48 release criteria to ensure the subjects remained in custody until investigators were done executing the warrant and were off the property.

Whenever information regarding a case involving marijuana enforcement is released, we always see comments about enforcement of drug laws being a waste of time, or comments about marijuana being legal.  Nothing about this operation was legal.  The amount of marijuana present at this address was unquestionably the result of illegal marijuana grows which in nearly every circumstance we have seen in Yamhill County, exploits human labor in substandard conditions with no workplace protections or equitable pay.  From coercion, deception, to indentured servitude and threats of violence, withholding of pay or personal papers and possessions, these large-scale drug trafficking rings are the definition of organized crime, and span multiple states and countries.

This is the largest marijuana seizure in the history of the Yamhill County Sheriff’s Office.