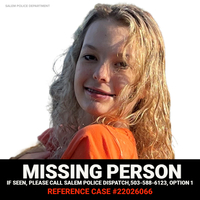 Our thanks to the agency for their work to locate Kaylee and efforts to reunite her with her family.

She was last seen wearing a green or gray hooded-sweatshirt, dark-colored pants, white and black sneakers.

Kaylee left her residence in south Salem driving a 2017, white, four-door Toyota Camry with Oregon license plate 263-JSW. She was last known to be in the Josephine County area.

The teen, who is intellectually delayed, also requires medication; however, she did not take it with her.

If anyone sees Kaylee and or the vehicle she is driving, please call your local police department immediately. Refer to Salem Police case number 22-26066.