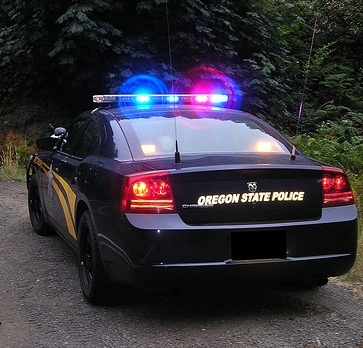 On Monday, January 2, 2023, at approximately 11:45 a.m., Corvallis Police Officers attempted to stop a vehicle on Peoria Road about a mile south of Hwy 34. The driver of the vehicle failed to stop for the marked police vehicle and fired gunshots multiple times at the Corvallis Police vehicles. The suspect, operating a black 1997 Honda, led the two Corvallis Police Officers in a vehicle pursuit through rural southwest Linn County, east on Bell Plain to Highway 99E.  Oregon State Troopers and Linn County Sheriff Deputies joined the pursuit on Highway 99E, north toward Albany.  Albany Police Officers successfully deployed spike strips near Beta Drive and again at 53rd Avenue, resulting in the suspect vehicle losing two tires, slowing the pursuit down.

The suspect continued the pursuit into Albany and Oregon State Police utilized a forcible stopping technique on the suspect vehicle near the Albany Train Depot.  The pursuit ended under the Pacific Boulevard Overpass where Oregon State Troopers were involved in a shooting with the suspect.  The suspect was apprehended and transported via ambulance to a local area hospital with non-life-threatening injuries.  No law enforcement personnel were injured during this incident. Detectives from the Linn and Benton County Major Crime Teams processed the scene of the shooting, and opened the highways at about 10:00 p.m.

The suspect, identified as 40-year-old Stephen Anthony Schmidt-Shelton of Corvallis, was arrested and is lodged at the Linn County Jail on the following:

Unlawful Use of a Weapon

Felon in Possession of a Firearm

Fail to Perform Duties of a Driver

Members of the Linn-Benton Major Crimes Team were assembled, with Albany Police Department leading the investigation of this incident. The investigation is ongoing and no further information is currently available.  All future media releases will be made by the Linn County District Attorney’s Office.