Retired Marion County Sheriff, Raul Ramirez, passes away at the age of 71 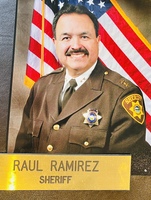 Raul was recruited in 1969 by then Police Chief Robert Prinslow to the Woodburn Police Department because of his display of strong leadership skills in high school.  The goal was to have Raul help strengthen community youth relations.  Raul became the department’s first police cadet and was later hired as a part-time dispatcher, before he began his 34-year-long career in law enforcement.

Raul’s first law enforcement assignment was as a Juvenile Parole and Probation officer for Marion County.  While serving in the Sheriff’s Office, he assumed increasing responsibilities, progressing from Corrections Officer, Deputy Sheriff, Corporal, Detective, Sergeant, Lieutenant, and ultimately to Marion County Sheriff in 1997.  Raul became the first Latino ever elected as Marion County Sheriff.  He subsequently won two more elections, serving ten years before retiring in 2007 due to health issues.  He championed community building, advocated for underrepresented populations, was named Oregon Sheriff of the Year in 2006, and in 2007 was the Oregon State Sheriffs’ Association President.

A quote Raul was well known for leading with, “Children may not remember what you teach them but will always remember how you treat them.”

Beyond work, Raul enjoyed fishing, crabbing, woodworking, gardening, coaching youth athletics, kayaking with his wife and traveling with is family.

Sheriff Joe Kast said, “Raul was a mentor to many of us over the years, and his work at the Sheriff’s Office and in the criminal justice community is still reflected in the work we do and the way we do it today, years after he retired.”

Our condolences go out to the entire Ramirez family and friends.  You will forever be in our hearts.