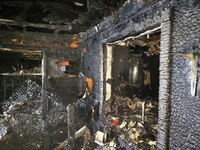 The Silverton Fire District responded at approximately 5:30pm on Saturday January 7, 2023 to a reported house fire located at 650 Lone Oaks Lp. in Silverton. When the first unit arrived on scene, it was discovered that the very large residential home was at least 30% involved in heavy fire. An aggressive fire attack was conducted, however, do to the amount of fire and smoke, it took crews several hours to extinguish all of the hot spots.

The house suffered considerable fire, smoke, and water damage. Unfortunately, the home is being considered a total loss due to the extensive damage the fire caused.

The two occupants were at home at the time of the blaze and were able to evacuate the residence quickly. The occupants were not injured while escaping. The monetary loss of the structure and the contents is very large with an estimated $700,000 in damages being reported. The occupants of the home are being assisted by the American Red Cross for housing, clothing and food. The home was fully insured

One of the occupants ran a cat rescue organization out of the home and unfortunately, approximately 30 cats were killed by smoke and heat. The origin and cause of the fire was investigated by Silverton Fire District Investigators. It was determined that the fire was accidental/not suspicious and was electrical related.

The Silverton Fire District responded with 7 fire engines and 2 water tenders on this 2 alarm fire. Mt. Angel Fire District and Marion County Fire District #1 also assisted by supplying apparatus and personnel. Over 32 firefighters were needed to control the fire.