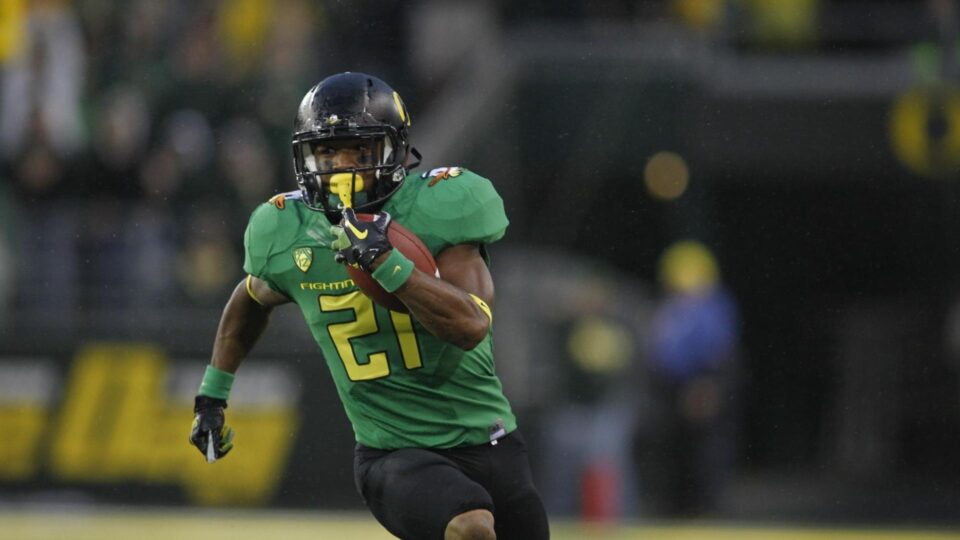 IRVING, Texas — Legendary Oregon football running back LaMichael James will be inducted into the College Football Hall of Fame after being announced as one of 22 members in the Class of 2023 on Monday by the National Football Foundation (NFF) and College Hall of Fame.

The 2023 College Football Hall of Fame Class will be officially inducted during the 65th NFF Annual Awards Dinner Presented by Las Vegas on Dec. 5, 2023, at the ARIA Resort & Casino in Las Vegas. “Selection to the College Football Hall of Fame is a well-deserved honor for LaMichael,” UO director of athletics Rob Mullens said. “He is a true Duck legend and one of the most electrifying players in the history of college football. The legacy LaMichael left in Eugene is everlasting and a significant reason for the continued success of our football program. He led our team to tremendous heights and produced so many memorable moments while being part of an offense that changed the game of college football. LaMichael’s performance and infectious personality connected him with Oregon fans and gave him a special place in their hearts, and we are extremely proud of him for his election to the Hall of Fame.”

James led Oregon to national prominence during his three seasons in Eugene (2009-11), helping the Ducks win three straight Pac-12 titles and reach three consecutive BCS bowls, including the 2011 Tostitos BCS National Championship game. James capped his collegiate career with 159 yards and a touchdown in a 45-38 win over Wisconsin in the 2012 Rose Bowl. James was a two-time first-team all-conference selection (2010 & 2011) and became just the third non-kicker since 1980 to lead the Pac-12 in scoring in back-to-back years. He is also one of just three players in conference history to rush for at least 1,700 yards in consecutive seasons.

James claimed the Doak Walker Award in 2010 as the nation’s best running back and was a finalist for the Heisman Trophy after leading the nation in rushing yards (1,731), yards from scrimmage (1,939) and touchdowns (24). His 21 rushing touchdowns are tied for the UO single-season record, and his 144 points scored are the most ever in a season by a Duck. James led Oregon to its first-ever 12-win season, culminating in its first national championship game appearance.

A native of Texarkana, Texas, James closed his career at Oregon with 1,805 rushing yards in 2011, second-most in UO single-season history. He averaged a UO record 7.31 yards per rush and erupted for a career-high 288 rushing yards in a win at Arizona, No. 2 in single-game program history. His 363 all-purpose yards in that game are a program record. James was a finalist for the 2011 Doak Walker Award and the Paul Hornung Award, which goes to the most versatile player in the nation. James burst onto the scene in Eugene in 2009, earning Pac-10 Freshman of the Year honors after setting the conference record for rushing yards by a freshman with 1,546. James set the Oregon record for 100-yard rushing games by a freshman (9) while averaging 6.72 yards per carry, and was selected as a FWAA freshman all-American.

James was drafted by San Francisco in the second round of the 2012 NFL Draft, and played for both the 49ers (2012-14) and the Miami Dolphins (2014-15). He currently owns and operates Killer Burger franchises in Lake Oswego and Beaverton, with a third location set to open in Eugene later this month.